General health and hormones need to be balanced to get the most out of light therapy. So today we are going to make one of the most ‘cleansing’ salads possible – a raw carrot salad. This recipe works great in the morning, but can be eaten any time of day.

As endotoxins are extremely damaging to the liver, illicit a powerful immune response and lead to systemic inflammation, we want to lower the amount of them in our digestive tract right? This is where the raw carrot and coconut oil come in handy.  The net physiological effect of this recipe is to reduce bacterial endotoxin & oestrogen (as well as other ‘downstream’ stress hormones – aldosterone, serotonin, prolactin, cortisol, etc), and to increase progesterone/testosterone/DHEA/T3 and other ‘youth’ hormones. 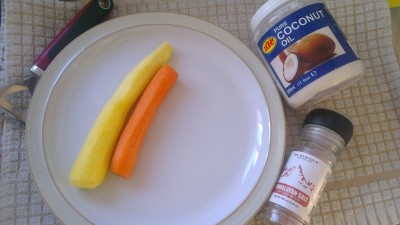 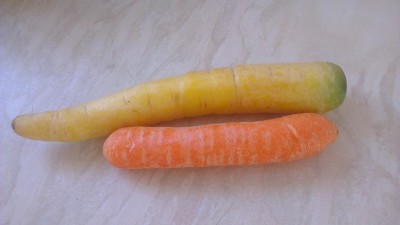 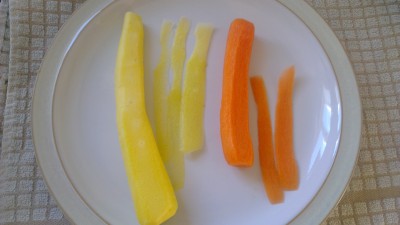 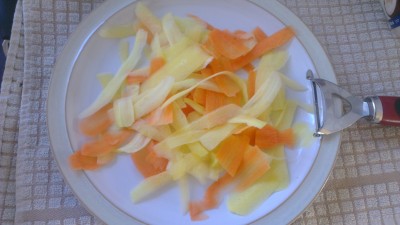 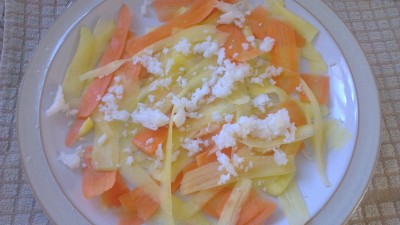 This recipe may not look so delicious on first glance, but actually tastes great. The salt draws some of the water out onto the carrot surface, leaving a salty, crunchy & velvety consistency. The coconut oil also contributes to the smoothness of the salad and helps it to go down much easier.

Sometimes I also like to add lemon/lime juice, honey, or maple syrup to improve the taste and add variety. I frequently have cheese, cottage cheese, meats, paté and a side serving of fruit juice with the salad too.

Note: vinegar, lemon juice and fruit juice can be bad for teeth enamel – consider rinsing the mouth out with water afterwards. Long-life pre-prepared lemon juice can be loaded with sulfite preservatives that are best avoided – stick to freshly squeezed or vinegar.

That’s it! Simple but effective. Take daily and consistently for several weeks to notice a dramatic change in bowel health. 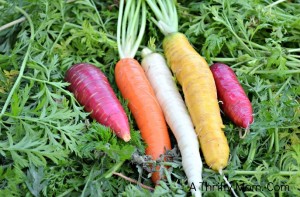 Carrot fibres are a natural antibiotic/antifungal (that’s why they don’t go moldy in the ground!). They don’t really get digested in the intestine, and the fibre gives off an anti fungal/biotic effect which intensely cleanses the digestive tract. Raw carrots are actually quite well researched for their effects on blood lipids and bile elimination (bile contains a lot of the toxins/hormones that have been detoxified by the liver – such as oestrogen). Eating a raw carrot daily will ensure that your bile (and toxins therein) is actually removed from your body, rather than being broken down and absorbed again (which would raise oestrogen levels).

It is important to note that carrot juice (or carrots that have been blended in a smoothie) will not have this same effect. Carrot juice is high in beta-carotene which, due to being an unsaturated molecule, will usually have strong anti-thyroid effects when consumed in excess. When raw carrot fibre is consumed however, most of the beta carotene is not absorbed. Raw carrot can also reduce blood glucose levels if eaten alone, so drinking some fruit juice, coke, milkshakes or sugar-sweetened coffee with it will help to prevent hypoglycaemia/cortisol.

Stick with organic carrots if possible to reduce pesticide exposure. Go for paler or white rainbow carrots too if you can get them, as the orange pigment (beta carotene) is an unsaturated molecule and prone to oxidation. Get your vitamin A from egg yolks and liver instead! 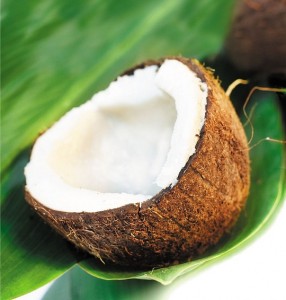 Coconut oil, despite being cursed by the mainstream for decades as ‘unhealthy’, has made a huge comeback recently, even in popular culture. There is ample research showing the tremendous health benefits of coconuts and coconut oil. An alternative option could be ‘mct oil‘ because it is 100% saturated fat too.

Coconut oil is similar to raw carrots, in that it has a very antibiotic-like effect on the bowel. This effect synergises with the raw carrot to produce a solid combination. The medium chain fats found in coconut also help to raise metabolism and free thyroid hormone, and you should feel warmer for about 1 hour after eating this meal.

I would have recommended organic extra virgin coconut oil if you asked me 12 months ago, but more recently I have found superior results from plain old refined coconut oil – it’s cheaper, less likely to cause side effects (such as nausea and diarrhea), is tasteless and odourless, and the fats are not damaged by the refining process anyway!

In this recipe I use himalayan salt (which may potentially be problematic due to iron content) because I like the taste, but any type of pure salt (without fillers/bulkers) is fine. Sea salt is fine. 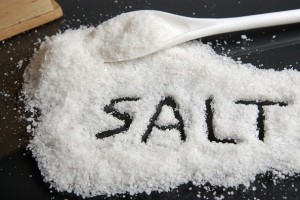 Salt, if taken early in the morning, helps to reduce the adrenaline/cortisol/aldosterone release which is seen roughly 30 minutes after getting up. Salt (sodium) is an essential mineral that is vital to keeping stress hormones down and metabolism up, not to mention maintaining your stomach acid levels, improving nerve function, etc, etc.

Restricting salt is an extremely unhealthy and uninformed thing to do: a few extra grams of salt per day has been associated with reducing the incidence of heart health issues by 1/3. It is true that restricting salt may lead to a small drop in blood pressure, but this has never been linked to an improvement in health, even in hypertensive people.

Vinegar (or the active compenent – acetic acid) has a mild disinfecting effect on the bowel. While this sounds similar to both coconut oil and carrot fibre itself, vinegar works on a different level to both, greatly enhancing the effect.

A few drops added to a carrot salad will shut down any fermentation in the bowel, thereby curtailing endotoxin production from bacterial proliferation.

It is important however, to use a clear/filtered/distilled vinegar, as many of the unfiltered variety are allergenic themselves. Many organic apple cider vinegars that contain ‘the mother’ for example, also contain various bacterial and fungal metabolites and waste products which may be problematic for some people. The least problematic type of vinegar would be a standard distilled white vinegar (which is basically just acetic acid in water). Other clear vinegars may be fine depending on personal tolerance so don’t be too worried if you much prefer the taste of another type.