Rosacea is a condition typically characterised by facial redness and swelling. It affects about 5% of the global population, and although the causes are known, they are not very widely known. It is considered a long-term skin condition, and most commonly affects European/Caucasian women above the age of 30. There are various subtypes of rosacea and it can affect anyone.

Red light therapy is well studied for things like skin healing, inflammation in general, collagen in the skin, and various related skin conditions such as acne. Naturally the interest has grown in using red light for rosacea. In this article we will look at whether or not red light therapy (also known as photobiomodulation, LED therapy, laser therapy, cold laser, light therapy, LLLT, etc.) can help to treat rosacea.

Everyone who has rosacea has slightly different and unique symptoms. While rosacea is commonly associated with facial redness around the nose and cheeks, there are various other symptoms which can be broken down and categorised into rosacea ‘subtypes’: 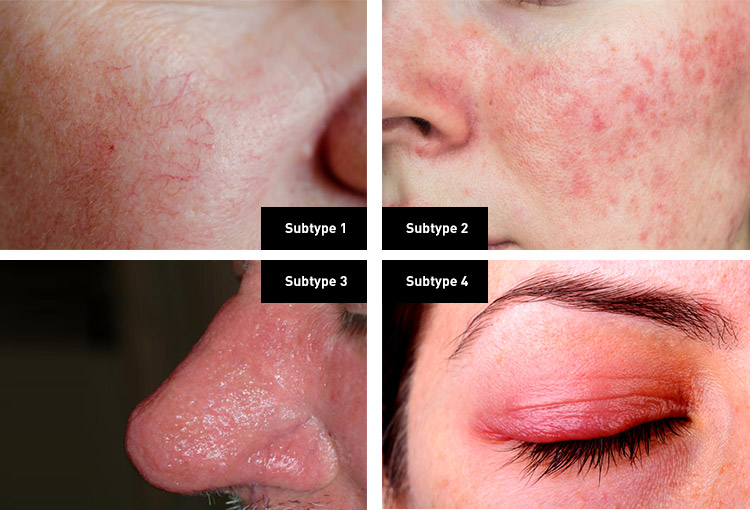 Knowing about the subtypes of rosacea is important in determining if you actually have it. If nothing is done to address rosacea, it tends to get worse over time. Fortunately, the applicability of red light therapy to treating rosacea doesn’t change with the subtype. Meaning the same red light therapy protocol would work for all subtypes. Why? Let’s look at the causes of rosacea.

The Real Cause of Rosacea

(…and why light therapy can help)

Several decades ago, rosacea was initially believed to be the result of a bacterial infection. As antibiotics (including tetracycline) worked to a degree to manage symptoms, it seemed like a good theory….but quite quickly it was discovered that there are no bacteria involved.

Most doctors and experts on rosacea these days will tell you that rosacea is enigmatic and nobody has discovered the cause. Some will point to Demodex mites as the cause, but almost everyone has these and not everyone has rosacea.

Then they will instead list various ‘triggers’ in place of the cause, or make suggestions that unspecified genetics and environmental factors are the cause. Although genetic or epigenetic factors can predispose someone to getting rosacea (relative to another person), they don’t determine it – they are not the cause.

Various factors do definitely contribute to the severity of rosacea symptoms (caffeine, spices, certain foods, cold/hot weather, stress, alcohol, etc.), but they too are not the root cause.

Clues to the cause

The first clue to the cause is in the fact that rosacea usually develops after age 30. This is the age when the first signs of aging become apparent. Most people will notice their first grey hair and first minor skin wrinkle around this age.

Another clue is the fact that antibiotics help to manage symptoms – even though there is no actual infection (hint: antibiotics can have short term anti-inflammatory effects).

Blood flow to skin affected by rosacea is 3 to 4 times higher than to normal skin. This hyperemia effect occurs when tissues and cells are unable to extract oxygen from the blood.

We know that rosacea is not merely a cosmetic issue, but involves significant fibrotic growth changes to the skin (hence the potato nose in subtype 3) and invasive blood vessel growth (hence veins/flushing). When these exact same symptoms happen elsewhere in the body (e.g. uterine fibroids) they warrant significant investigation, but in the skin they are dismissed as cosmetic issues to be ‘managed’ by ‘avoiding triggers’, and later even surgeries to remove the thickened skin.

Rosacea is a significant issue because the root cause is physiological processes deeper in the body. The physiological state leading to these skin changes isn’t only affecting the skin – it affects the entire internal body as well.

The flushing, the growing/invasive blood vessels and the thickening of the skin can be observed readily in rosacea, because it is apparent in the skin – the surface of the body. In a way, it is a blessing to get rosacea symptoms, because it shows you that something is wrong inside. Male pattern hair loss is a similar thing in that it points to underlying hormonal dysregulation.

All of the observations and measurements regarding rosacea point to mitochondrial problems as the root cause of rosacea.

Mitochondria cannot use oxygen properly when they are damaged. The inability to use oxygen increases blood flow to a tissue.

Mitochondria produce lactic acid when they can’t get and use oxygen, which leads to immediate vasodilation and the growth of fibroblasts. If this problem is prolonged over a period of time, new blood vessels start to grow.

Various hormonal and environmental factors can contribute to poor mitochondrial function, but in the context of red light therapy, the most important impact is from a molecule called Nitric Oxide.

The main theory explaining the light therapy effects is based on a molecule called Nitric Oxide (NO).

This is a molecule that can have various effects on the body, such as inhibiting energy production, vasodilation/expanding of blood vessels, and so on. The one we are mainly interested in for light therapy is that this NO binds at a key location in your mitochondrial electron transport chain, stopping energy flow.

It blocks the final stages of the respiration reaction, so stops you getting the main chunk of energy (ATP) and any carbon dioxide from glucose/oxygen. So when people have permanently lower metabolic rates as they age or undergo periods of stress/starvation, this NO is usually responsible. It makes sense when you think about it, in nature or in survival, you need a mechanism to lower your metabolic rate in times of lower food/calorie availability. It doesn’t make much sense in the modern world where NO levels can be influenced by specific types of amino acids in the diet, air pollution, mold, other diet factors, artificial light, etc. The lack of carbon dioxide in our body also ramps up inflammation.

Light therapy increases production of both energy (ATP) and carbon dioxide (CO2). The CO2 in turn inhibits various pro-inflammatory cytokines and prostaglandins. So light therapy reduces the amount of inflammation in the body/area.

For rosacea the key takeaway is that light therapy is going to reduce inflammation and redness in the area, and also resolve the problem of low oxygen consumption (which caused the blood vessel growth and fibroblast growth).

There are various subtypes and manifestations of rosacea
Rosacea is a sign of aging, like wrinkles and grey hair
The root cause of rosacea is reduced mitochondrial function in cells
Red light therapy restores mitochondria and reduces inflammation, preventing rosacea

8 thoughts on “Light therapy for rosacea”