Red light has been shown to provide benefits for many living organisms on earth. This includes all plant life, a wide variety of bacteria/micro-organisms, fish, small animals, dogs, horses, humans, but also insects, snails and worms. As a natural component of sunlight this should come as no surprise.

It does seem somewhat counterintuitive regarding earthworms, however, that red light might benefit them, as earthworms are generally averse to light. Worms don’t have eyes as such, but they have cells similar to those cells in our retina that are light sensitive.

Worms are actually harmed by direct sunlight or avoid it for several reasons including:

Basically, natural sunlight exposure is lethal to worms, in a variety of ways. So why exactly is red light beneficial for worms? How can we be sure? What downstream effect could this have on soil and plants in the soil?

Sunlight is a broad spectrum of light, containing wavelengths from ultraviolet, through all the colours of the rainbow, and also infrared light. Red light is a much narrower spectrum, occupying only a small range of wavelengths. More info here.

The effects in worms are best shown by the below table (taken from the study: “Effects of light colour and oscillator frequency on earthworm bioactivity” Owa, et al., 2007):

Worms under the red light processed by far the most organic material and produced the most worm casting. Compared to the worms receiving no light at all (which is standard in most vermicomposting), red light supplemented worms produced 66% more castings. A huge difference.

Standard white light seems to have an overall negative impact, reducing production by over 30%. Green and blue light have a positive effect on cast production, albeit less than red’s. Although, judging from worm emigration rates, they were uncomfortable under both green and blue, showing the least tolerance (they wanted to escape). They showed the most tolerance to dark and also red. This suggests that the worms were both comfortable and productive under red light, but stressed (and productive) under blue. It also suggests that worms are comfortable in the dark, but not optimally stimulated by darkness.

This study shows that the benefits are definitely from the colour of the light, not the heat produced (as all colours of light produced the same low heat). Worms seem to benefit the most from red light, and are harmed the most by UV (or spectrums containing UV like white/sunlight).

The reason that red light is beneficial for all organisms is because we all have mitochondria (plants, animals, bacteria, fungi) and they all function in more or less the same way. Respiration is one of the most primitive/primary foundations of life…and red light interacts to enhance it.

By looking at this equation above, we can see several things. Not only will red light make worms produce more energy (so they can process more material into worm castings), but also increases the total carbon dioxide produced by the worms. This is most significant if plants are being grown nearby, as carbon dioxide dramatically improves plant growth. So not only do the worm castings themselves improve plant growth (via soil quality), the worm’s respiration also improves plant growth by producing co2. Both worm castings and co2 production are enhanced by red light. 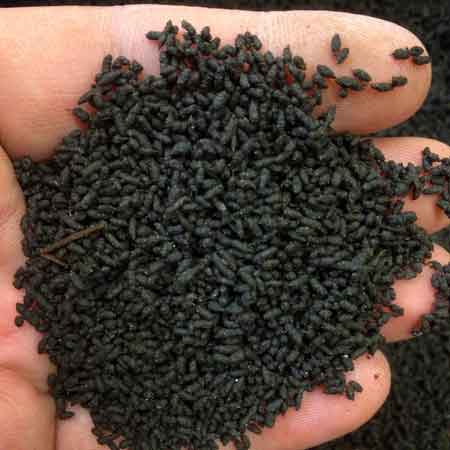 Vermicomposting is a process that involves the breakdown of organic matter into worm castings. It is carried out naturally by earthworms and various organic ‘feed’ can be used to supplement it such as vegetable peels, bread, cardboard and egg shells.

As the organic matter decays, worms can eat the microorganisms growing on it and those in the soil. They can also eat very small pieces of food directly. Various factors affect the rate at which worms will process the compost, such as; temperature, type of feed, moisture, oxygen availablity, species of worm, pH, pests and lighting.

Use pure red light only – for worm health

Using just any source of red light to improve worm function isn’t recommended as most high powered lights put out excess heat. Red heat lamps, incandescents, HPS, red halogen and pretty much every other type of red light fall into this category. The main exception is red LEDs. 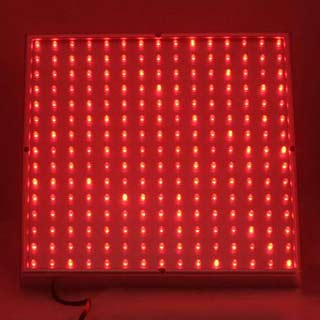 LED technology is the most energy efficient lighting technology available at the moment. This basically means that it converts more energy into light than other types of lighting. LEDs therefore produce a lot less heat than other bulbs. This is especially important for worms and vermicompost as you don’t want to inadvertently heat the worms, which would produce negative results.

Below are initial recommendations, a starting point if you will, based on the limited available studies at this point in time.

For large-scale vermicomposting a series of high powered, red spectrum only, 100w+ LED lights (the same as red-only plant grow lights typically used for ‘flowering’) would be optimal. The light(s) should be placed directly above the active part of the worm bin, high enough that the light spread covers from side to side.

For small-scale vermicomposting a lower powered 5 to 15 watt red LED light would be optimal, positioned centrally on the ceiling of the worm bin. Even something like red Christmas lights could work, or a red LED panel. This could be used all day long, especially in outdoor bins in winter.

Red light is beginning to be acknowledged as an essential component of vermicomposting, bringing the worms to maximum effectiveness. The potential is exciting with perhaps a doubling of worm cast production in an optimal configuration. There are many potential lighting options for large and small scale worm bins, depending on the size and depth. We need more studies and experimentation from the vermiculture community to see what works best.

If you have tried red light in your own vermicompost equipment or have any information/anecdotes to share, please leave a comment below!